How to Rescue Human Rights from Proactive Counterterrorism in Ethiopia

Though, in theory, there is no trade-off between counterterrorism and the protection of human rghts, in practice their interaction has been problematic. Broadly, the problematic nature of counterterrorismf rom human rghts perspective is attributable to two factors. The first is lack of universally accepted definition of terrorism. The second is the proactive approach of counterterrorism - an approach that departs from the traditional reactive approach of the aiminal law and allows intervention against a conduct before it matures into a terrorist act. This paper is concerned ith Articles 4 and 7 of the Ethiopian Anti-terrorism Proclamation No 652/2009, which, respectively, aiminal e preparatory conduct to commit a terrorist act and membership in a terroist organization, and introduce a proactive approach to counterterrorism in Ethiopia. The applcation of these provisions involves prediction of future behaiours based on Lmited information, which makes them susceptible to misuse. This potential for abuse calls for maximum care in their implementation. This article explores how these provisions should be construed to mitigate human rghts casualty. Draning on the law and practice of counterterrorism in jurisdictions from which the Ethiopian
antiterrorism proclamation has been adapted, this article suggests a precautious reading of these pro visions. This path, which calls for the court to play its role in safeguarding human rights from proactive counterterrorism in Ethiopia, is not only desirable, but prudent and sufficienty mindful of the constitutional role of the judiciary. 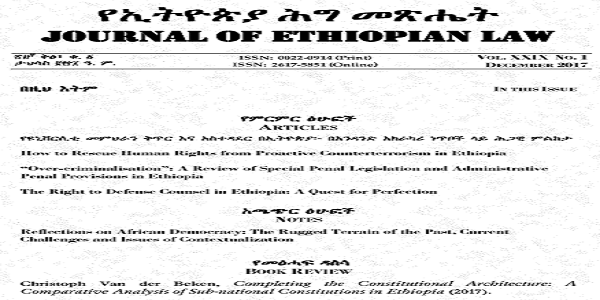